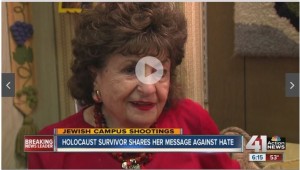 “It was like you take an old wound and open it up,” Warshawski said.

The Overland Park woman and her family were forced into German Nazi concentration camps in German-occupied Poland when she was a little girl.

“I watched my mother being forced into a gas chamber where she died,” she said. “I’m so disappointed that people still hate other people just because of their race or religion.”

Warshawski is convinced that if the government doesn’t do something, hate crimes like Sunday’s shooting will continue and even worse things will happen.

Suspect Frazier Glenn Miller is facing two counts of capital murder and one count of premeditated murder in Johnson County.  Prosecutors say he’s the gunman who shot and killed a 14-year-old boy and his grandfather at the Jewish Community Center and then went on to kill another woman at Village Shalom.

“The criminals are using our freedom of speech laws to spread their message,” Warshawski said.

She believes our government needs to come up with new laws to maintain our current freedoms but make it more difficult for hate groups to say and spread their messages.

Check out the original post and video on NBC Action News.