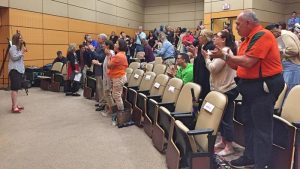 Teachers from South Florida recently learned different ways to incorporate Shoah studies into their teachings from a variety of speakers during the annual week-long University of Miami Holocaust Teacher Institute.

This year’s institute drew 200 participants and Miriam Klein Kassenoff, the director for the institute, was impressed with the teachers’ enthusiasm.

“Each teacher I know will leave the institute with incredible academic knowledge and skills to teach the Nazi Holocaust and its lessons appropriately,” Kassenoff noted.

Some of the numerous speakers during the institute included Kassenoff, who provided her testimony on when she fled Nazi-occupied Europe in 1941 as a young child with her parents and infant brother, the late Judge Ted Klein; local Holocaust survivors who also presented their testimonies; noted Holocaust scholar Michael Berenbaum, who presented a few topics, including the insightful and fascinating “God and the Holocaust;” and many others.

“Our presenters are top scholars of the Holocaust and we are fortunate to have them come spend the week working with our teachers,” Kassenoff said.

Richard Puentes, a teacher at Jorge Mas Canosa Middle School in Miami, said that the institute is probably the best professional development program he’s been to in his career.

Davie offers an all-kosher feeding program and what’s known as a “choice-market” pantry, where limited-income people can shop for what they want.

“It’s incredibly informative. Everybody knows more about the subject matter than I’ve ever seen before and I think it’s very pertinent right now with the times we’re living.”

During the week, Alberto Carvalho, superintendent for Miami-Dade County Public Schools, and Robert Brazofsky, executive director for the District’s Department of Social Sciences, were honored. Carvalho also presented commentary on Lisbon and the Holocaust, which Kassenoff described as outstanding and the highlight of the week.

“He added valuable information about Lisbon and the Holocaust as he is originally from Lisbon,” she said.

Another highlight of the week was perhaps the presentation of the delightful and impactful documentary, “Big Sonia,” about a 91-year-old woman named Sonia Warshawski, one of the last remaining Holocaust survivors in Kansas City and one of the only survivors there who speaks publicly about her wartime experience. The film presentation was sponsored with the support of the Miami Jewish Film Festival, the Holocaust Memorial Miami Beach, Greater Miami Jewish Federation and the State of Florida Task Force.

The film, especially the survivor’s big heart and humanity throughout it, was well-received from the teachers, who gave a standing ovation to Leah Warshawski, its co-director/producer and granddaughter of Sonia, and also asked her numerous questions following the screening.

“We’re really honored to be able to show the film to educators,” Warshawski said. “Educators are on the front lines of making an impact and making change and that’s everything that we’re trying to do with this movie, so it’s been an honor for us to show this film in a room of so many passionate and smart people.”

Davie Towbin, who teaches at G. Holmes Braddock High School in Miami, said, “It’s a complete film that makes you understand that we’re here for a bigger purpose in this world and I think it unified a lot of people.”

“It’s a story that everyone can relate to because I came from Cuba when I was 11 years old. I was in a ship that sank, I was put in a concentration camp for a week before I came and I was separated from my parents at age 11, so I can associate myself with the struggles and all the horrors she went through in a different way.”

Although the film has been screened at film festivals through the country, including the MJFF in January, Warshawski told the teachers about the need to get a theatrical release. Visit fund.bigsonia.com to help get the film a theatrical release. Educators who pledge at least $50 during its crowdfunding campaign will receive 15 percent off the educational version of the film this fall. Contact Warshawski at leah@inflatablefilm.com for more information.

UM’s School of Education & Human Development, The Sue and Leonard Miller Center for Contemporary Judaic Studies, The School of Business Administration, WLRN, Targum Shlishi, the Holocaust Memorial Miami Beach and Facing History and Ourselves together with Miami-Dade Public Schools’ Department of Social Sciences presented the institute.