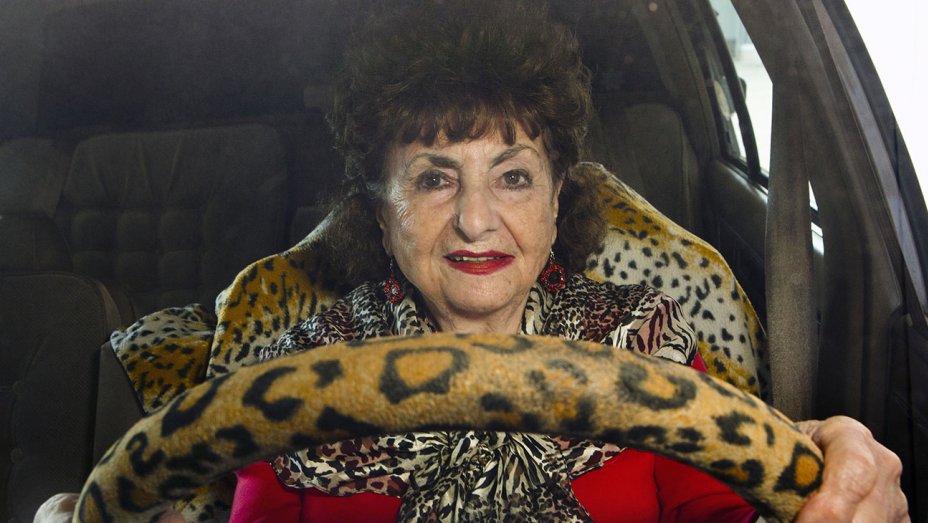 Bottom line: An unforgettable woman refuses to forget in this thoughtful exploration of history’s fallout.

The Holocaust survivor profiled in Leah Warshawki and Todd Soliday’s film turned 91 during its premiere run at the Napa Valley Film Festival, where it received both the jury and the audience prizes for best documentary feature.
The petite nonagenarian at the center of Big Sonia would be a compelling film subject under any circumstances. With her bright lipstick and penchant for animal prints (“They never go out of style”), Sonia Warshawski is as vibrant as she is diligent, single-handedly running a six-day-a-week tailor shop. That it’s the only thriving business in a moribund Kansas City mall is itself a story; so, too, is the jolt of Old World glamor she brings to a suburban Midwestern setting.

But for Sonia, the importance of keeping busy is no simple response to widowhood or means of fending off the loneliness of old age. A particular darkness has haunted her most of her life: her memories of the years she spent as a prisoner at Auschwitz and Bergen-Belsen. As the only Holocaust survivor in the Kansas City area to speak publicly about her experiences, she has turned those memories into a form of action, enlightening and therapeutic.

Filmmaker Leah Warshawski, who directed the documentary with Todd Soliday, is Sonia’s granddaughter, but their work is no hagiography. While the filmmakers’ affection for their subject is clear, their approach is clear-eyed and measured as they observe Sonia in her retail refuge and during her visits with students and prisoners as a motivational speaker. Engaging and thoughtful, the winner of the Napa Valley Film Festival’s top documentary prize would be a strong addition to nonfiction lineups on the festival circuit and the small screen, as well as in niche theatrical settings.

Soliday’s camerawork, intimate but not intrusive, catches glimpses of the tattooed number on Sonia’s arm as she arranges fresh flowers, makes clothing alterations, doodles when business is slow and greets longtime customers with warm pizazz; one of them calls her vivaciously decorated shop “the neighborhood bar and grill minus the booze.”

But between her exuberant spoonerisms (“bog-mindling”) and her appreciative comments on beauty wherever she finds it, Sonia acknowledges her emotional damage as well as her refusal to be bowed by it. At 13, in the Polish city of Miedzyrzec, she watched from an attic window as neighbors were rounded up for the camps. Soon her family would be sniffed out of their hiding places by the SS’s dogs, and she never again saw her father or brother. At 17, she witnessed her mother entering the gas chamber. When, decades later, she heard the history-erasing claims of Holocaust deniers — “a thunder to my mind” — she was galvanized to counter their propaganda with her truth.

The film captures the effect of that truth on the faces of those listening to her quiet, impassioned words. Sonia’s insistence on speaking out has a life-changing impact on at least one of the teens who meets her. In a program addressing bullying and aimed at reducing recidivism, incarcerated men appear shaken to the core when they hear what happened to her family.

But with her husband, who was also a Holocaust survivor, Sonia created a family, and Warshawski’s access to Sonia’s children — the filmmaker’s father and aunts — takes the film into the complexities of the wartime experience as an emotional inheritance for the second generation, a fascinating topic that’s rarely addressed. Sonia’s son, Morrie, recalls a sadness in the household and his awareness that he and his siblings weren’t as “natural and free” as other kids.

Key to the strength of Big Sonia is its refusal to give in to easy bromides. Its use of animation to illustrate Sonia’s memories spins off her own artful drawings in a way that amps the sense of unspeakable horror rather than sugarcoating it. The filmmakers, like Sonia herself, acknowledge the ongoing struggle that’s essential to surviving such trauma. There’s hard-fought clarity when Sonia says that she leaves the matter of forgiveness to a higher power. And as survivors’ numbers dwindle, there’s urgency when she insists on remembering.