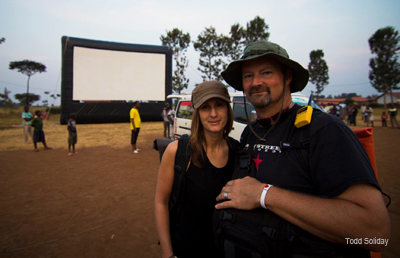 Leah Warshawski did not come upon her career in what might be called a conventional sense: Instead, she stumbled into filmmaking while studying in Hawaii while translating Japanese for tourists on a boat.

“I never thought I’d make films or want to make films, but loved working outside,” says Warshawski, who had been studying Japanese. But when one of her passengers, a marine coordinator for the television show “Baywatch,” needed an assistant, Warshawski’s career turned to work on commercials, feature films, and television shows such as “Lost” and “Survivor: Fiji.

As the years went on, however, she became more interested in documentary work.

Today, “about 75 percent of what I do is writing documentaries and telling stories,” she says.

“We were in Rwanda working on another project, and they told us about Hillywood and told us about the concept behind it,” Warshawski says. “Rwanda is an incredible backdrop for making a movie.”

During the crew’s first trip, in 2007, they decided to tell the triumphant story of a country, healing from the horrors of genocide 15 years earlier, whose recovery was brought about in part through filmmaking.

“Back then we didn’t realize that the film would be what it has become,” Warshawski says.

“Finding Hillywood” brought her in touch with the Seattle-based Washington State Holocaust Education Center. A partnership with the center made sense, given the concept of a country that reinvented itself after such a tragic time in its history.

“Leah is incredibly talented and has the ability to connect the audience to the people in her films — not just as characters, but you feel like they are your friends, people you know or people you really want to know,” says Ilana Kennedy, the Holocaust Center’s director of education. “The scenes feel real, not contrived — like we are sitting with her in the person’s living room and we are sharing a personal moment. This was how ‘Finding Hillywood’ felt to the audience of educators when we showed it at an advanced teacher seminar we held in August at Seattle University.”

On her current documentary project, “Big Sonia,” Warshawski captures the personal story of her grandmother, 88-year-old Sonia Warshawski, one of the last remaining Holocaust survivors in Kansas City.

“We have experience telling stories about difficult topics,” says Warshawski, “but we put a different spin on tragic topics. Ultimately the film is hopeful.”

From an educational perspective, Kennedy and the Holocaust Center could not be more pleased about that film’s eventual release.

“I love that it will not be a traditional Holocaust film, but will tell the story of her grandmother in both a sensitive and humorous way,” says Kennedy.

In her effort to partner with organizations that can benefit from the educational component of the films, Warshawski aims to tell the stories of triumph from tragedy. Her stories echo what has concerned the Jewish community in recent years: Fewer and fewer Holocaust survivors remain to tell their stories. Capturing Sonia’s story on film now encapsulates her legacy for future generations.

“[Sonia] is 89 next month, so we’re trying to finish the film while she’s still in good health — we want her to be part of the outreach,” Warshawski says. “Hopefully within the next year we will be starting outreach.”

Warshawski has lived in Seattle since 2005 and her film company, Inflatable Film, has been based out of West Seattle since 2007. Her primary focus now is to promote “Finding Hillywood” and generate more funding for “Big Sonia.”

“We just had the iTunes release for ‘Hillywood,’” she says. “We’re looking for post-production funding and outreach partners.”

To find out more about Leah Warshawski’s projects, visit inflatablefilm.com.